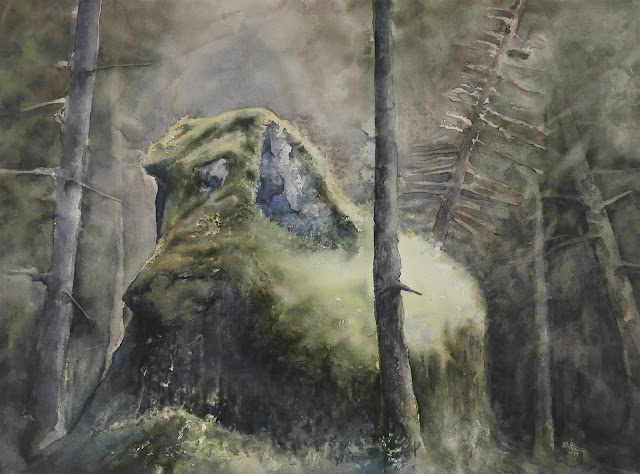 I noticed this scene when I was going to pick my girlfriend up after a thing. The thing I really liked about this was how the boards along the wall of the barn were all snapped in half and sort of bended out like that. The shape of the light on the boards and the contrast to the shadows were really nice. 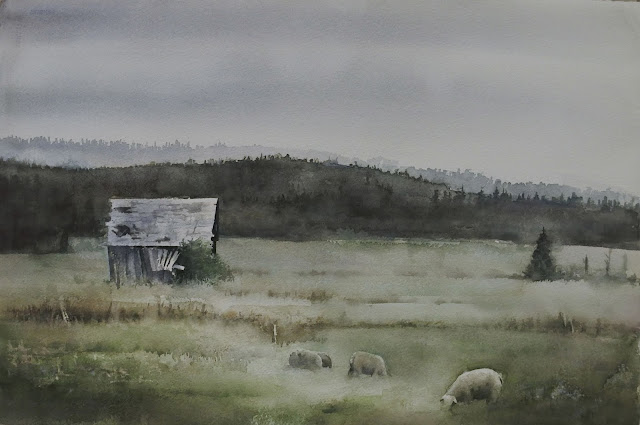 In the beginning of the summer I was walking on a bridge over a river around 2 AM and I was watching the fog role in over the world around me. I took many photos because I absolutely loved how the environment and the reflections in the water became one shape. And the fog over the trees reflected and got mixed up with the fog on the water. And in the middle of all this these tiny lights shone like stars.

I had fun and I'm happy about how it turned out. 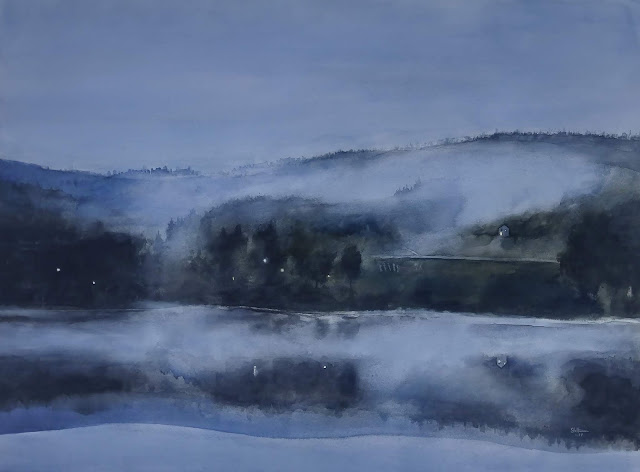 When I was traveling to visit my girlfriends family I was looking at the nature around me and I especially liked how the melting snow created a sharp line through the environment. Wherever the snow was melting away, there remaining patches of snow reminded me of how it looks if I just lasso a part of a picture in photoshop and cut it out. It's so graphic looking. No real soft transitions, just a big white empty space cut out from the surroundings. So I started taking a bunch of photos to have as inspirations for paintings and one of them was of this old barn that gave me the feeling that it had been put away in "a corner" of the surrounding forest.  Even thought the effect I mentioned above is not that noticeable in this one, I still enjoyed playing with the texture of the ground showing up under the melting snow.

This was also an experiment for me because it was a lot about trying to describe a lot of information without getting lost in the process. I wanted to simplify but not too much. 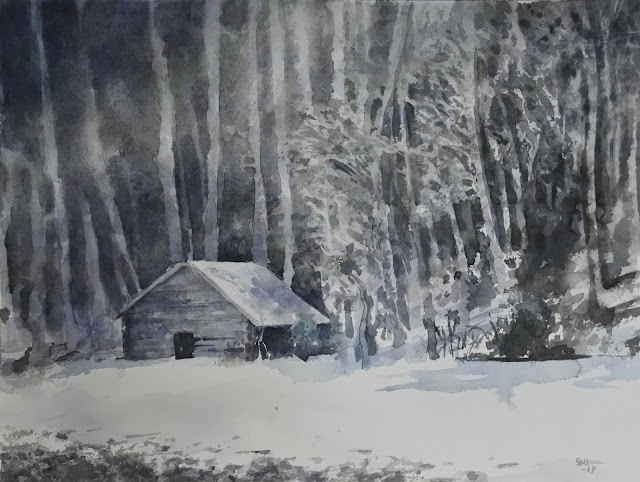 During the fall i was looking at light that was putting on a real show. Weird pockets of light in shadows, and trees with dramatic light hitting them durring the sunset. My attention was especially caught by this one birch tree outside my girlfriends family's summer house, which is in the middle of the forest. Every day around the time the sun was going down behind the treetops, somehow this tree was illuminated by a beam of light, while the surrounding forest was in shadow. I even tried to understand exactly where the beam was coming through the forest behind me, but i never found it. So while we stayed at the house i walked out everyday around the same time to look at this tree. The light was so strong that it really seemed like the tree was glowing by itself. It actually cast a reflected light on the ground underneath it that was a little colder so the ground seemed to light up as well. So i tried to take a photo (which was really hard in itself) and then i've been trying to capture a sense of that lighting in this painting. I at least think i managed to capture some of the effect and feeling of the scene.

When it comes to the actual painting process this one was very much balancing the light and the darkness surrounding it. Too dark and the tree would be too strong against the background. Too light and the tree would loose it's power. If the birch tree was too abstract it would not feel stable and would be sort of floaty. I wanted it to have some weight, but on the other hand if it's too defined i would lose the feeling of the light. So i was going back and forth a lot on this one until i came pretty close to what i was going for. 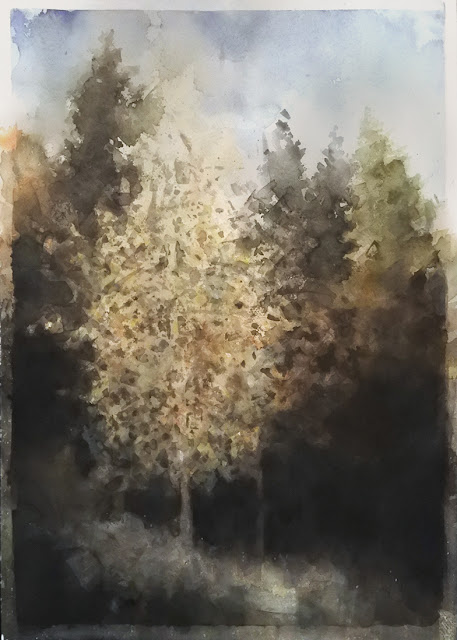 Last week i attended Nordsken, which is a pop culture convention. It was a lot of fun. I had a small art show among many other great artists where i showed original paintings, prints and some of the original art from my graphic novel Ellna.  Here is a photo of a friend of mine helping me with setting things up for the show. It was fun, and i had a lot of fun with the set up. A very relaxed show. 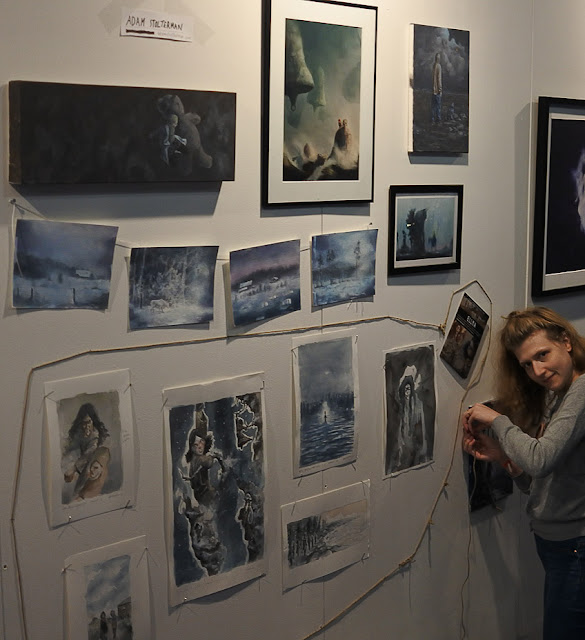 I also had my book for sale during the convention and i was part of a panel discussion about myths and legends as part of the process for writing stories or graphic novels. 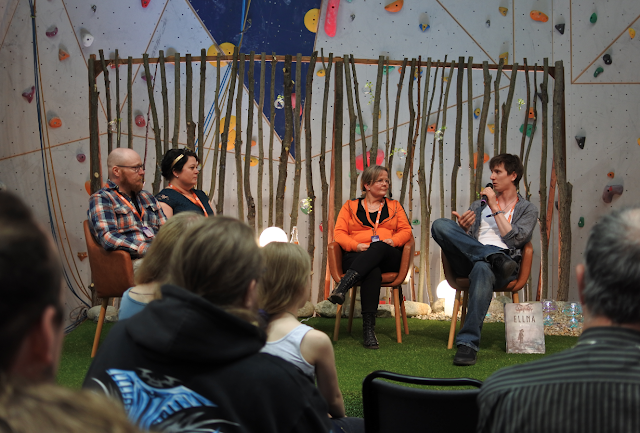 The week was amazing and i'm already looking forward to next year!

A painting i did while looking at my brother's beautiful photos. I wanted to work with positive forms over negative forms. I like the effect of the contrast between the dark shapes of the trees in the foreground against the light shapes of the forest in the background.
Watercolour on watercolour paper. 22,5 x 22 cm 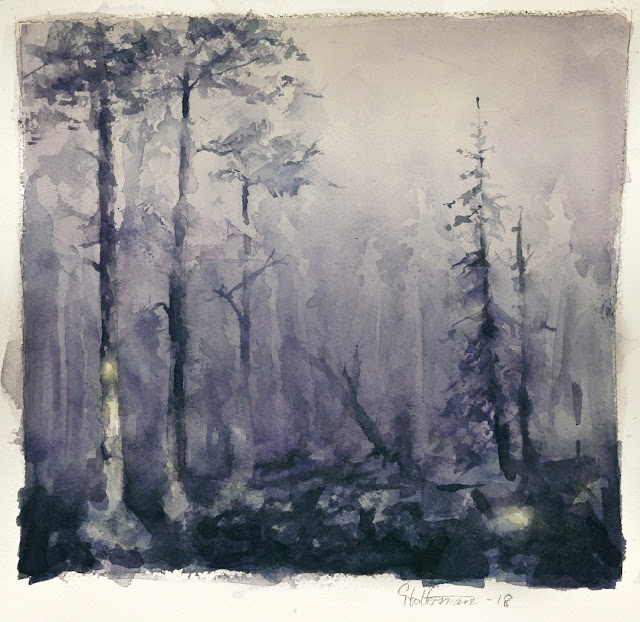 This is another painting i started as a demo for a class. I did not plan this other than i did a very loose sketch of the shed. I didn't use any photos. Instead i was showing how i can find the environment with abstract shapes that shows up when i drag the brush over the paper. The process is very reactionary. Reacting to what the paint is doing more than trying to control where it's going. So like an out of focus photo getting sharper i started defining shapes and forms in the textures that showed up by accident. 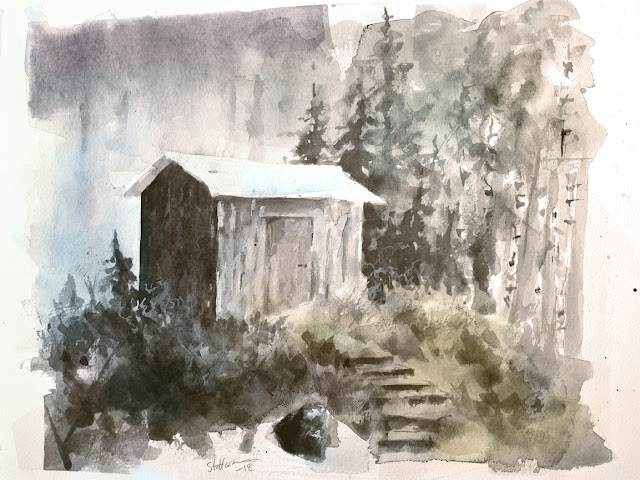 It's the day after christmas and tomorrow i'll be back home which means i'll be back in my studio working on jobs again. So this might be the last gouache painting i'll do in a little bit. But i'll definitely post more. 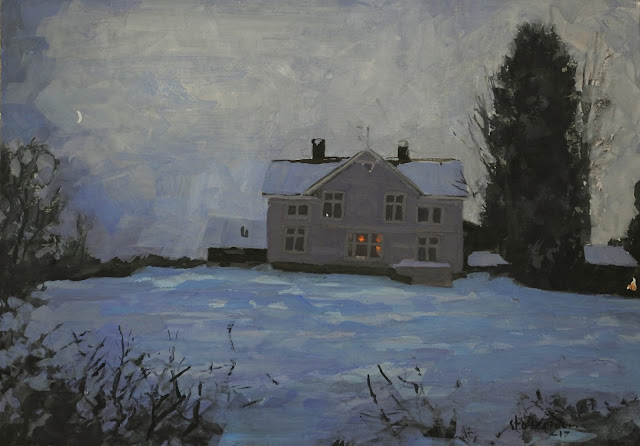 Another small gouache painting in my sketchbook. Since i'm away all i have with me is my sketchbook and gouache kit. But i'm having a lot of fun with it. When i was walking through the small town i'm in to go to the store, i noticed the fun red reflection that was glimmering in the windows of this small chapel. The sun was just starting to set so the warm light was also giving the chapel really nice warm and cool colors, so i decided to paint it. I tried to rely on temperature shifts in shadow and not go too dar in the values.
I used white, cerulean blue, yellow ochre, cadmium red and black. 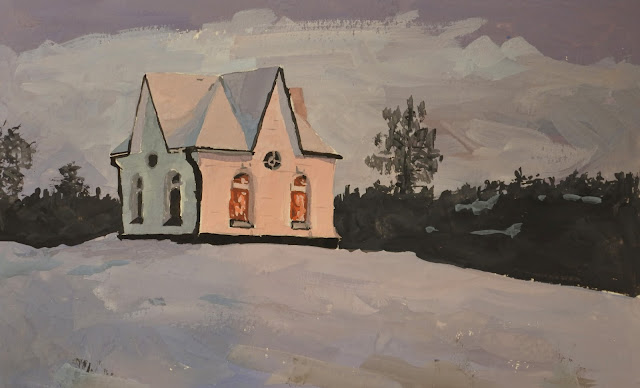 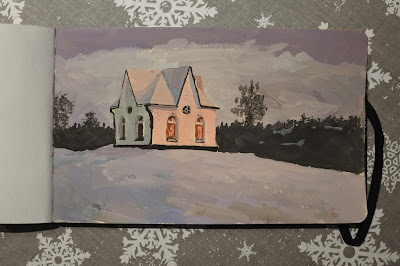 Adam Stolterman
Hi! I'm Adam Stolterman and i'm a freelance illustrator. I've done everything from book illustrations to background paintings for stage productions and my own graphic novel. Here i share my paintings, sketches and process, and some of my illustration work. For questions about commissions or anything else, just write me an email and i'll get back to you. Thanks for stopping by!